Jonas Gwangwa, the Oscar-nominated South African jazz musician who campaigned against apartheid for decades, has died aged 83. The cause of death has not been announced.

A giant of our revolutionary cultural movement and our democratic creative industries has been called to rest; the trombone that boomed with boldness and bravery, and equally warmed our hearts with mellow melody has lost its life force. Jonas Gwangwa ascends to our great orchestra of musical ancestors whose creative genius and dedication to the freedom of all South Africans inspired millions in our country and mobilised the international community against the apartheid system. 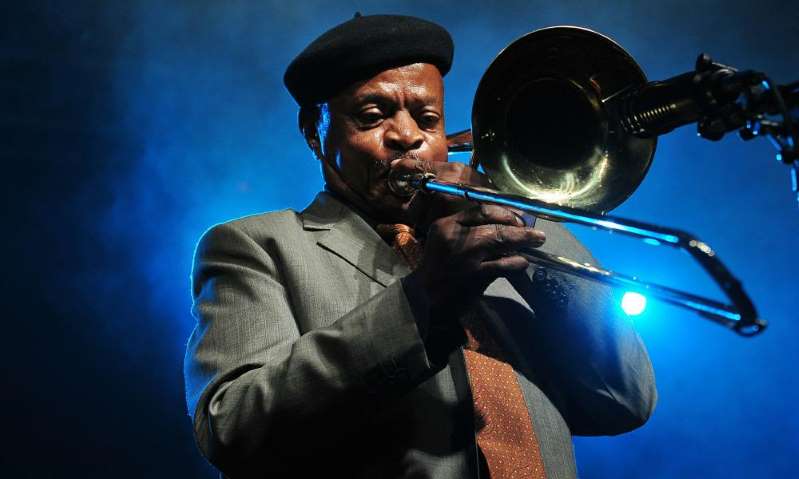 Gwangwa, a trombonist, was born in 1937 and first found fame in the 50s with the Jazz Epistles, playing alongside musicians who would become some of South Africa’s biggest jazz stars: trumpeter Hugh Masekela, pianist Abdullah Ibrahim, and saxophonist Kippie Moeketsi. In 1959, he and the Jazz Epistles recorded the first LPs by black South African jazz artists, two volumes of Jazz in Africa with visiting American pianist John Mehegan.

Following the advent of apartheid, when jazz musicians were censored in South Africa alongside a raft of other repressive measures, Gwangwa left the country and lived in exile. During the 80s he was musical director of the Amandla Cultural Ensemble, a large music and dance group organised under the African National Congress political party, who performed globally as a way of raising consciousness about the anti-apartheid movement.

In 1987, alongside English composer George Fenton, he composed the score for Cry Freedom, the drama about anti-apartheid activist Steve Biko starring Denzel Washington. He was nominated for two Oscars in 1988, for best original score and song.

He returned to South Africa in 1991, and continued to record and release music. In 1997, he composed the music for South Africa’s bid for the Olympic Games.

We have 13 guests and one member online