The Dalai Lama has appealed to world leaders to take urgent action against climate change, warning of ecological destruction affecting the lives of billions and ruining the planet, including his birth country, Tibet.

As a call to action he has brought out a new book declaring that if Buddha returned to this world, “Buddha would be green”.

In an interview for Channel 4 News and the Guardian, the Buddhist spiritual leader spoke from the Indian city of Dharamsala, where he has been exiled for six decades. He warned that “global warming may reach such a level that rivers will dry” and that “eventually Tibet will become like Afghanistan”, with terrible consequences for at least a billion people dependent on water from the plateau “at the roof of the world”.

The 85-year-old Nobel peace laureate is considered by his followers to be the earthly manifestation of an enlightened one who has chosen rebirth in order to help liberate all living beings from suffering through compassion.

Lhamo Thondup, as he was named at birth, was discovered as the latest incarnation of the Dalai Lama when he was just two years old. He uses Zoom to communicate with people around the globe these days, unable to travel or invite visitors because of the coronavirus pandemic.

He insists, as he announced in 2011, that he is retired from politics and his leadership of the struggles for Tibetan freedom from China, and that ecology is now the thing that is “very, very important” to him.

In the week the Cop26 UN climate conference was to have been held in Glasgow, he says has high expectations of world leaders, and wants them to act on the Paris climate agreement.

“The United Nations should take a more active role in this field,” he says. Asked whether world leaders are failing, he says: “The big nations should pay more attention to ecology. I hope you see those big nations who spent a lot of money for weapons or war turn their resources to the preservation of the climate.” 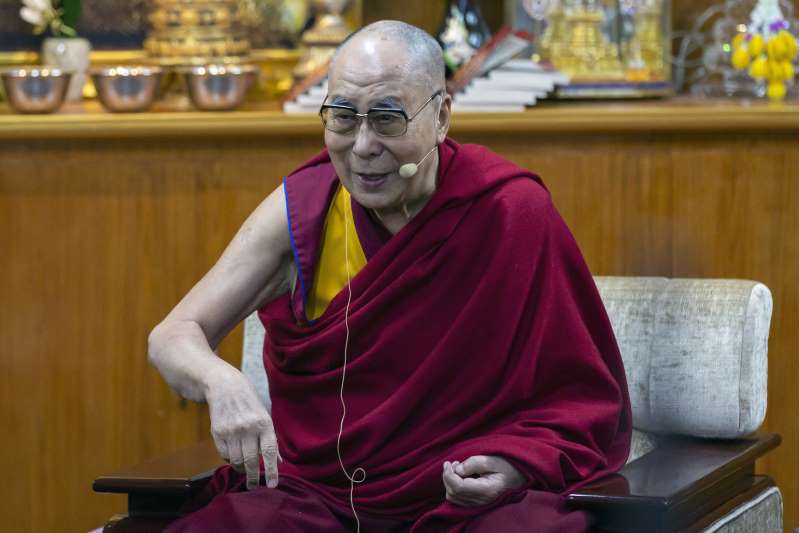 The Dalai Lama says that if he joined a political party now, “I would like to join the Green party. Their idea is very good.”

The Dalai Lama has been known to put his foot in it with inadvertent enthusiasm, such as when he said it was possible he could be succeeded by a woman, but that she should be “very, very attractive”. He later made clear that he had meant no offence and said he was deeply sorry that people had been hurt by his words.

His suggestion for how to make world leaders see sense on climate change may also raise eyebrows, but again seems to be the product of a lively 85-year-old sense of humour. The Dalai Lama chuckles as he suggests we should lock them all in a room and “pipe carbon dioxide into it until they realise what climate change really means”. He explains that “people who have a certain luxury sort of style of life in a room without proper oxygen” would realise “it is very difficult”.

The Dalai Lama says he is in favour of large-scale tree planting to help tackle climate change. He also believes meat consumption worldwide should fall dramatically, but explains that since his own decision to go vegetarian in 1965, health problems have led doctors to advise him to resume eating a little meat.

He says his greatest personal contribution to fighting climate change is education and promoting the concept of compassion. The Dalai Lama is most passionate when talking about his idea of oneness among 7 billion people. “We see too much emphasis on my nation, my religion, their religion. That really is causing all these problems due to different religions and different nations are fighting. So now we really need oneness.” He even says he can now live as one with China, which he claims is “the biggest Buddhist population now”.

Nearing the end of this life, the Dalai Lama has not publicly explained how his reincarnation should be sought, or whether a 15th Dalai Lama should be found at all. He jokes that in his next life “I may be born on the Moon or Mars. Then I will starve.”

In the past he has raised the idea of being the last in the line of Dalai Lamas, perhaps to prevent China naming a politically cooperative successor. For now, he says he wants to leave that decision to others. “As long as I live I should be useful to help other people. Then after that, not my business. These are the concerns of other people.”

His advice for the rest of us living through the coronavirus pandemic is similarly practical, crediting an unnamed Indian scholar with the idea that “If there’s a way to overcome [coronavirus], then no need to worry. If there is no way to overcome, then it’s no use to worry too much either.”

We have 34 guests and 2 members online