Eight men and seven women who emerged into daylight after spending 40 days and 40 nights in a cave without any indication of time made a surprising discovery - time appeared to move more quickly in confinement.

The group was sequestered underground for a scientific study known as the ‘Deep Time’ project, which measured how the brain perceives time in isolation.

The project’s 15 volunteers emerged from the Lombrives cave in southwest France on Saturday, after spending 40 days in a 10 degree Celsius, 100 per cent humidity cave without any sunlight or clocks.

Participants also had to pedal a bike to generate electricity and source water from a well that was 45 meters below the ground.

According to Christian Clot, a lead participant and director of the experiment, time appeared to pass faster in the cave.

“We thought we were only around 30 days into the experiment when we were told it was over,” said Mr Clot. “It was actually disappointing for us… we were ready to spend ten more days inside... we were all happy in the cave.” 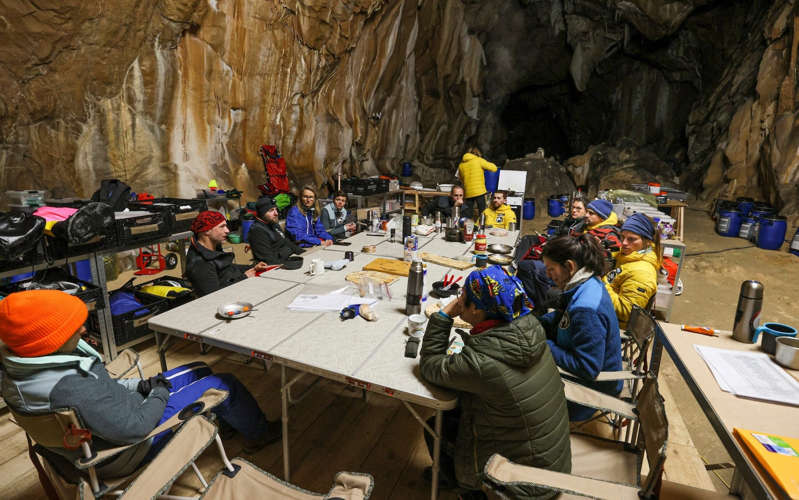 While time seemed to pass quickly, the participants counted an average of 32 hours for what they thought was a 24-hour day.

On Friday, a group scientists entered the cave to tell the participants the experiment was almost over. “It was a real shock,” said participant Emilie Kim-Foo, a 29-year-old nurse. “I was sure we had at least another five or six days left.”

The participants ranged from 27 to 50 years old and came from a mix of different socio-economic backgrounds including a teacher, jeweller, biologist and communications manager.

While inside the cave, they had only their biological clocks to know when to eat, sleep, and wake up. Scientists monitored their sleep cycles, behavioral patterns and interactions by using various sensors.

One of the sensors, a tiny thermometer that measures body temperature, was placed inside an edible capsule which participants swallowed like a pill.

“When you’re asleep your body temperature goes down, and it goes back up when you wake up so it was a nice indicator for the scientists to see how many hours we slept,” said Mr Clot.

Twelve teams of scientists will spend the next few months analysing the project’s data -- everything from participants’ neurological patterns to gastric health while inside in the cave.

Mr Clot, a Franco-Swiss explorer, is also the founder of the Human Adaptation Institute, which organised the 1.2 million euro (£1 million) experiment.

He says another goal of the project was to see how groups can organise without any time indicators.

“How can a group synchronise itself, and work together without any time information?” said Mr Clot, who added one of the biggest challenges of the experiment was arranging group meetings without being able to set a specific time. During the experiment, participants were divided into teams and assigned different projects.

According to Clot, those working on the same project adopted similar sleep patterns.

Team members received brain MRIs before entering and after leaving the cave. Over the course of the next two years, they will participate in three more experiments under different climatic environments: the rainforest, the desert and a polar climate.

While many scientists praised the project for its one-of-a-kind nature, critics said researchers could have benefited from adding a control group to the experiment.

Pierre-Marie Lledo, the director of Genes, Synapses and Cognition laboratory at the Pasteur Institute, said adding a control  to compare the results of those that were locked inside the cave to people who remained outside would give the experiment more of a scientific validation.

Mr Clot has defended the study, which he says is particularly relevant in the context of the pandemic, which has accelerated peoples’ mental fatigue and caused nearly 40 percent of the population to lose track of time.

“We want to understand what happens to people when they suddenly have to face extreme conditions like a tsunami, and earthquake... or even a pandemic like Covid-19,” Mr Clot said. “In a way we are all facing new conditions right now and we all need to learn how to adapt.”

We have 190 guests and no members online