Mount Erebus is Antarctica's second-highest active volcano, after Mount Sidley, and the southernmost active volcano on Earth. With a summit elevation of 3,684 metres, it is located on Ross Island, an island formed by four volcanoes in the Ross Sea. It has been active for around 1.3 million years and could help provide evidence for a secret world of animals and plants beneath the icy continent.

Surrounding Mount Erebus is an intricate system of caves, hollowed out in the ice by steam.

These caves were explored during an extensive study led by the Australian National University, in which researchers found how steam produced from the volcano travels through open spaces, melting passageways through the network of caves in the process.

The team said the caves are light and could reach temperatures of 25, making them potential breeding grounds for life.

The study was published in 2017 and led by Dr Ceridwen Fraser, Laurie Connell, Charles K. Lee and S. Craig Cary.

At the time, Dr Fraser said: "It can be really warm inside the caves - up to 25 in some caves.

"You could wear a t-shirt in there and be pretty comfortable.

"There's light near the cave mouths, and light filters deeper into some caves where the overlying ice is thin." 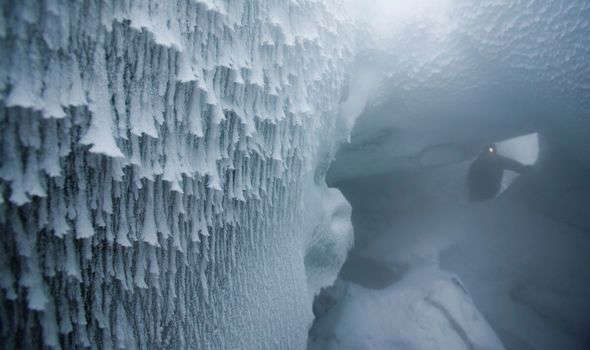 Carrying out DNA analyses of soil taken from the caves, the team found evidence for organisms including algae, moss and small invertebrate animals.

This did not come as a surprise because many of these species are found elsewhere in Antarctica.

But not all sequences could be fully identified.

Dr Fraser explained: "The results from the study give a tantalising glimpse of what might live beneath the ice in Antarctica - there might even be a new species of animals and plants.

"The next step is to go and have a really good look and see if we can find communities living beneath the ice in Antarctica."

No definitive evidence was found to suggest that anything was currently living, but signs that things used to live there were present.

The initial discoveries were just scraping the surface, as co-researcher Charles Lee explained that there are more than a dozen active volcanoes in Antarctica, all of which have similar caves, which can be mapped through radar techniques. 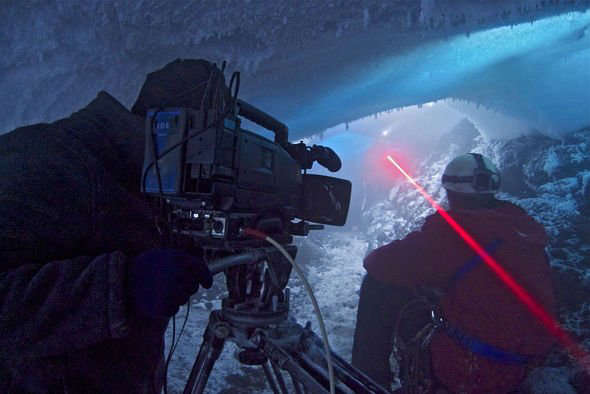 Most, however, are inaccessible to humans.

Professor Laurie Connell said: "The next steps will be to take a closer look at the caves and search for living organisms. If they exist, it opens the door to an exciting new world."

Despite their discoveries, the study's author conceded that they still know "little" about life inside the cave networks, which "may harbour diverse and complex communities".

But, the discoveries have prompted speculation as to whether extraterrestrial life could be found in Antarctica.

David Childress, author of a number of books focusing on pseudoarchaeological and pseudoscientific topics, spoke to the recent Sky History documentary 'Ancient Aliens'.

The documentary's narrator said recent scientific work has discovered some of these cave networks could be as large as the entire island of Manhattan.

Mr Childress said: "Here we have a huge, apparently, underground world, beneath Antarctica and this could be used by extraterrestrials as these ready-made bases that are underground and are hidden."

One conspiracy theorist believed he had found evidence for extraterrestrial life on an Antarctic island in 2020.

He said he had discovered a triangle craft with a hump in the middle, which looked metallic and was "sitting in an area which appears to be the location of an ancient alien base".

Others, however, dismissed his claims, instead arguing that it was simply a rock ridge.

We have 126 guests and 2 members online