A widow who was planning his wedding after being given a second chance at love was forced to bring it forward when his bride-to-be received a devastating terminal cancer diagnosis two weeks after they set a date.

Craig Sivorn, 57, and teaching assistant Claire Rumsey, 55, of Langwith, Derbyshire, fell for each other almost instantly when they connected on Match.com in October 2017.

Craig, a project engineer on the railways, proposed on a cruise in April 2019 and the couple planned to marry in July of this year in Edinburgh, inspired by their love of The Proclaimers.

But weeks after settling on a date for their big day and just two days after booking their honeymoon - a Fairytale Bavaria & Danube Cruise - on October 6, mother-of-three Claire received a call telling her she had cancer at the base of her spine.

Further tests revealed it was colorectal cancer requiring chemo and radiotherapy - however her condition deteriorated rapidly and doctors advised them to bring their wedding forward, giving Claire just months to live.

It feels like history is cruelling repeating itself for Craig, who lost his first wife-of-30-years Maxine to brain cancer after a 12 year battle in 2017.

The couple married on April 9, with the help of the team at Ashgate Hospice who are currently supporting Claire and, by tragic coincidence, nursed Maxine in her final days.

'It was important to get married because that is what we had planned to do and we weren't letting the cancer take that away,' Craig told FEMAIL. 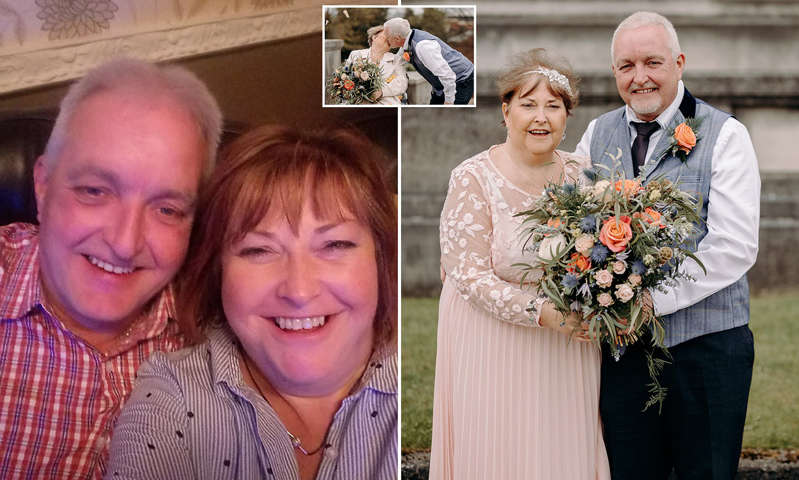 'It had destroyed enough of our dreams, so when I asked Claire to marry me on our Valentine's Day card this year, Claire said yes again.'

Claire was married to her first husband Phil for 20 years before separating in 2009. She then brought up her three children Jake, now 31, Lewis, 27, and Chloe, 24, as a single parent. Craig also has two sons, Ashley, 32, and Sam, 15 - but due to current lockdown restrictions, not all their children could attend their wedding.

'Only six people were allowed at the registry office due to Covid, so it was just me, Claire, our two witnesses and their partners,' Craig said.

'As a surprise for Claire, all but one of the 13 brothers and sisters gathered outside the town hall, so when we came out after the ceremony it was a brilliant surprise for her, especially as her 97-year-old mum was there.

'We then went home where our kids and a couple of family members had a little celebration.'

Craig told how when he and Claire matched online, they texted each other for six hours before meeting up in person the next day.

'It wasn't long at all before we knew it was special, a few weeks we think, after more dates and meeting each other's kids for a meal,' he recalled.

'I proposed to Claire while on a cruise. We did a short European cruise in April 2019 with our kids, Claire's mother and a couple of Claire's friends.

'One night we were having dinner in one of the restaurants and with the help of Claire's friends we got the subject around to marriage, at that point I asked Claire to marry me, she said yes.

'We both love The Proclaimers and the film musical Sunshine on Leith; we wanted to do something special for our wedding, so decided to get married in Edinburgh. Unfortunately there is no registry office in the Leith suburb, but our reception would have been there.'

Having been struggling with back pain, Claire had a CT scan to determine if a trapped nerve was causing it, but it revealed something far worse; cancer at the base of her spine and in her lymph nodes.

It was secondary, meaning a further scan was required to find the primary cancer, which was identified as colorectal cancer.

'The oncologists offered radiotherapy treatment for the secondary cancer to be followed by chemotherapy for the primary bowel cancer, with the possibility of being okay for two to five years,' Craig explained.

'Claire had the radiotherapy and all seemed to be going well. Then on a Friday she had blood tests to ascertain the best type of chemotherapy, to be followed on the Monday by Claire signing the consent forms to start the treatment on the Wednesday.

'Unfortunately on the Saturday night Claire suffered severe stomach pains and was admitted to hospital - her intestines had ruptured due to the cancer. As a result of the surgery she had part of her lower intestine removed and now has a stoma bag.'

Worse still, the infection couldn't be fully removed during surgery and Claire has been on antibiotics since, with a secondary bag due to the infection and a fistula.

As a result, it is deemed to risky for her to have the chemotherapy treatment, and at this point the couple were told that Claire had just months to live.

'We were advised by doctors to cancel our July wedding and bring it forward,' Craig said.

'With the help of Ashgate Hospice staff, family and friends we were able to pull the wedding together in three weeks, and we got married at Chesterfield's Registry Office. Our thanks go to Ashgate Hospice for the excellent care they have provided us.'

From the original diagnosis to the further blows that followed, Craig said it feels like it's been one step forward then two steps back.

We are devastated by the news we have received over the past few months,' he said.

'All our dreams of travelling, retiring, doing all the things couples do together were shattered.

'Claire has been very positive throughout, but frightened to get too excited when something goes right because of the bad luck we've had.

'Now we are enjoying evenings watching TV, and visits from family and friends. We try to get out when possible now that Covid regulations are reduced, and look forward to hopefully having a few nights away when permitted, pending Claire's health.'

We have 61 guests and 3 members online