A hole has opened in the southern region of the Sun and is spewing a stream of charged particles towards Earth. NASA images snapped by the space agency's Solar Dynamics Observatory (SDO) reveal a large "coronal hole" in the Sun's outer atmosphere - the corona. The stream of "gaseous material" escaping this hole is forecast to hit the planet between Saturday and Sunday.

According to the website SpaceWeather.com, this could result in some minor geomagnetic unrest in the planet's magnetosphere - the region of space dominated by Earth's magnetic field.

Solar winds are a constant stream of plasma that flows from the Sun's corona and out into space.

The plasma is mostly comprised of free-flowing electrons and protons.

The streams escape the corona, which is the Sun's outermost layer that reaches temperatures of up to 1.1 million C.

The stream heading towards Earth is expected to produce some beautiful aurora effects in the polar regions.

And the good news is that the forecast does not predict any impacts on technology or communications.

Depending on their severity, solar storms are known to sometimes knock out satellites or cause power blackouts.

SpaceWeather.com's astronomers wrote: "Earth is exiting one solar wind stream. Another is on the way. 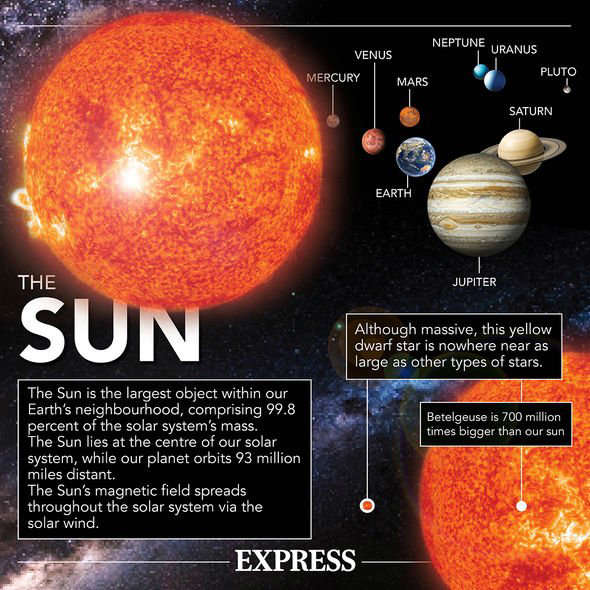 "Flowing from a southern hole in the sun's atmosphere, the gaseous material is due to arrive on November 21 to 22.

"NOAA forecasters say that a corotating interaction region (CIR) travelling just ahead of the stream could spark geomagnetic activity and Arctic auroras on November 20."

Corotating interaction regions or CIRs describe a compression region that forms ahead of a coronal hole stream.

They form as a result of slower solar winds interacting with the higher-speed stream.

According to the American Meteorological Society, they most often develop ahead of "more persistent coronal holes".

When they reach the Earth, the interplanetary magnetic field strength increases and can trigger geomagnetic storms (solar storms).

Solar storms are ranked on a scale of "G1 Minor" to "G5 Extreme".

At the lower end of the scape, the US Space Weather Prediction Center (SWPC) says minor storms can cause weak power grid fluctuations and disturb satellite operations.

Weak storms can also create auroras in the polar regions by exciting atoms and molecules of gas to new energy levels.

Extreme storms, on the other hand, have the potential to trigger mass blackouts and knock out communications.

Historical records suggest they may even create auroras as far south as Florida or Texas.

According to the latest SWPC forecast, the inbound solar winds are not expected to have any noticeable impact on the planet.

Similarly, the SWPC does not expect any radio blackouts over the weekend.

We have 89 guests and one member online